Last week’s Night Walk fundraiser was an incredible success!  With 166 people walking in 26 locations, there were people supporting orphans in China all over the world!  During the walk, we hosted a live stream of two of our locations in China.  It was so fun to see the excitement on each of their faces!  Some of the kids featured have been coming to camp for five years and are anxious to return!

On behalf of the kids, THANK YOU!

One of the most common questions we get about our our mission trips to China is, “What does a week look like?”  We decided to share with you a glimpse of what YOU could do for a week, to change an orphan’s life.  Whether you are planning on volunteering or sponsoring an orphan, here is a week at Bring Me Hope camp.

This is one of the most exciting parts of camp.  Seeing the little faces peering out of the bus as they pull up to your camp location.  One by one these kids, both excited and nervous, exit the vehicle and are paired with you.  Their little hands slide into yours and you make your way back to your lodging, preparing for the rest of the week.

Congratulations, you and your Chinese translator are now proud parents for the week with your amazing and beautiful child.  Your responsibilities will consist of making sure they are bathed, dressed, fed and physically taken care of throughout the day…this of course includes a bedtime story and tucking them in.

Throughout the day you and your camp group will take your children out to experience firsts.  These include swimming, eating ice cream, learning songs, coloring, crafting, playing games and of course your nightly dance parties.  While this is fun and an incredible experience, it’s the in-between moments that change lives…the times of comforting your child when they are sad, the times of carrying them around when they are too tired to walk and moments of just listening and loving them in the midst of the days events.  This is what brings healing and shows your child what it means to be loved and valued.

Day 5: “Goodbye is the hardest part”

This is by far one of the hardest days emotionally.  It’s when you have to let go and know your child has to leave and return to the orphanage.  It’s the day when you read aloud the letters you write to each other…it’s your last hugs…it’s the final moment you get to say to them “Wo Ai Ni,” I love you and will never forget you.  Their belongings are packed up, tears are shed and you watch YOUR child drive away.  You are now left with memories and a passion to do something about this.  Your job is just starting…and you are responsible to make that child’s voice heard, advocating for their needs!

For another awesome picture of camp, check out our documentary, Hannah’s Story and also don’t forget to check out our website to sponsor an orphan or volunteer in China. www.bringmehope.org

Today I had the opportunity to go and visit the lovely kids from a local private orphanage who we met at camp.

My Aussie friend, Hollie and I packed our vegemite sandwiches and boarded the jeep for a China day of many varied experiences.

We were met with big smiles and cuddles from Lily – 4 year old Down’s syndrome girl who is also deaf. She seems really happy and as bubbly as ever.

The highlight of the day was seeing Wei Wei and presenting him with a “stimulation tent” and a piano. As you may remember he is the blind boy who at 5 years old still weighs less than the average 1 year old.(but still managed to steal the hearts of BMH volunteers and staff.

He laughed and smiled when we presented him with his piano and all the children loved the tent that Hollie made them.

We treated Wei Wei at camp for worms and his terrible diarrhea has stopped and he looks like he has gained some weight!

We also got to see the little cleft palate/lip baby who was found in July. He was abandoned at a few days old in this box but is now a happy, chubby baby boy who loves his “grandpa”.

On a sadder note we got to meet another newcomer…

He is a little boy between 2 and 3 who was left at the door at 11PM a few nights ago. His legs were tied together so he couldn’t follow his parents after they left him ! Because he has had spina bifida he is incontinent of urine which must have become too much for his parents.

Thanks for your continued interest in these children – hopefully they will return to camp next year.

Currently we continue to pray for them and their carers – an elderly couple who now look after over ten kids.

“A Mother’s Love’s” own Jeff Knipe brought a team from Florida to Bring Me Hope’s Camp in Xi’an this summer!

(Jeff Knipe with FangFang (above), WenWen (below) and translator at camp in Xian!)

Here is an excerpt from their newsletter:

From July 12-16, the AML team volunteered at Bring Me Hope camp in Xi’an. Each volunteer was assigned one to two children from nearby orphanages in Ankang or Fuping along with a Chinese / English translator. In total, there were 20 orphans, 18 volunteers, and 15 translators who bonded quickly and had an incredible 5 days together.

We visited museums, played in fountains, made crafts, ate meals together, and even had a talent show! Words cannot express the impact this 5-day camp had on all of us and our translators. One of our immediate projects is to get medical help for Wen Wen here in the United States. She’s a beautiful 20-yr-old girl from Ankang (Karly Knipe’s orphanage) who has never walked and we are committed to helping her in any way we can!

Surgery for Wen Wen – We are working hard to obtain a medical visa to bring Wen Wen to the U.S. for surgery. Wen Wen is 20 years old and has never been able to stand up or walk! Please pray for this difficult process. You can see a video of Wen Wen on our website.

(Sie Jie waits for a family.)

For more information about A Mother’s Love, please visit our website: www.amotherslovechina.com

Donations can be done through PayPal on their website or mail to:
A Mother’s Love 224 Chestnut Ridge Street Winter Springs, Florida 32708

Remember Lena? She was with us during 2007 Summer Camp in Beijing!

Check out this video of others who are continuing to help her!

My name is Susan. My daughter Alexis and I went to one of the BMH summer camps last year–what a great time that was! Perhaps because they were older and I am a Mom, I bonded especially with my two campers ZhangYan (16) and Qingqing (20), and it broke my heart to watch the vans drive away that last day. Lily, my translator, spent an extra day after the camp before we all parted ways…and we solidified a friendship that had been growing that week as God broke both our hearts for these orphans.

Both Lily and I had signed up for Becca Bolt’s email after-camp course (for campers & translators) on Relationships; I think it’s purpose is to encourage growth in friendships begun at the camp, but Lily and I didn’t need a reason to email…by that time we were emailing each other a couple of times a week. ZhangYan and Qingqing were continually on my heart, and–although she is not yet a Christian–I could see that God had put the girls on Lily’s heart, too. We talked a lot about them, and I told Lily that I felt I would be back in a year so that we could all be together again.

As the months went by, God provided money for my “China Fund” again and again. Although I was dismayed at how the cost to return to China more than doubled, still God brought the money necessary to make it happen for Alexis and me. Lily explained to me that she had told her family so much about the girls & her experience at Camp that her Father was interested in meeting these orphans and the Americans who seemed to care about them so much. I asked her to call the girls’ orphanage and ask if it was possible for us to travel with them; Lily called and the Grandfather agreed!

The most important part of our time together was spent at Lily’s home. I don’t believe her family had ever met a Westerner…but they welcomed us into their lives and treated us as Honored Guests. By the end of the first day together, God had grafted us into this wonderful and caring family. My greatest desire was to see God bond ZhangYan and Qingqing’s hearts to the hearts of Lily’s family–and that is exactly what He did! Lily’s Father announced that the girls must come and spend their future school vacations with the family from now on, and every one of the apx. 20 of us was crying on the day that we left Lily’s home. My heart longs for the day when Alexis and I can return to China, but I know that, should this not happen, ZhangYan and Qingqing now have family who love them.

In an email that I just received from Lily’s sister Violin (who, along with Lily and her best friend Nancy were translators at one of the BMH camps this summer), she wrote, “Your coming have changed my whole famlies a lot! We were curious ,joyful, my families have understood love deeper…Dad and mum often talk about you. There is no difference between Chinese and Americans to some degree! We love you all and hope for another wonderful together-meeting !” GOD is SO good!

When we returned to the Orphanage–through God’s miraculous timing–both Tim and William (Alexis’ two buddies from last year) were there to meet us! Alexis brought gifts for the boys, and we spent the day with them before reluctantly returning home. Lily and I have decided that next time, we need to bring TIM ‘home’, too…..is God awesome, or what??

Alexis, with her translator Yang,& buddies Tim and William, last year at camp.

We held a surprise Birthday Party for ZhangYan, Qingqing and Lily’s Father the last night we were at their home, complete with party hats, gifts and birthday cake. I’ve never seen the girls smile so much!

Qingqing, ZhangYan and Lily’s Father with the birthday cake. 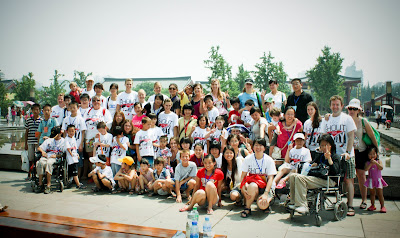 What happens when you have a group of willing volunteers, helpful translators, agreeable orphans and a big God? We found that it leaves you with a pretty seamless week of camp!

The children loved making pottery, running through the city fountains, and going to the pool with giant water slides, but sometimes our more meaningful camp moments happened when we were simply hanging out together.

The more intimate times of making bracelets for one another, reading bedtime stories together, and watching people perform in the camp talent show are precious moments. Like spending time with family around the dinner table, we didn’t need anything fancy to enjoy one another.

One family group especially enjoyed a two-hour conversation about their life-stories. After the kids heard their volunteer’s story, one little boy asked, “Can you tell me more about Jesus?”

The Lord is opening hearts around here, young and old. We praise Him for all He is doing here in Xi’an.